Radon gas emits from the soil and rocks.  It starts out as uranium, a naturally occurring element in the soil.  Over time, uranium breaks down into an element known as radium.  As radium breaks down it emits radon gas.  Radon gas itself is not harmful, but miniscule radioactive particles called radon decay particles can be inhaled and become embedded in lung tissue which can lead to lung cancer.

Do I really need to have my house tested for radon?

Radon is the second leading cause of lung cancer in the US behind smoking.  It causes around 20,000 cancer related deaths a year.

The area I live in isn’t considered a high threat area for radon, so do I really need to have it tested?

It’s true that some areas of the country or certain counties are considered lower risk for radon than others.  However, research has shown that a house can have high levels of radon even if located in an area that is considered lower risk, or even if the house next door tested at lower levels.

What is considered a safe level of radon?

Radon is measured in picocurries per liter (PCIL).  The EPA doesn’t consider any level of radon to be technically “safe”.  There’s always some risk with radon.  However, the higher the level of radon, the more exposure you have to radon decay particles, and the higher the risk of lung cancer.  The EPA says the average house has a radon level of 1.3 PCIL.  They recommend an action level  to have radon mitigation done if it tests higher than 4.0 PCIL. 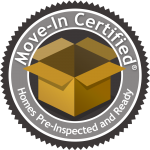 Scroll back to top Schedule an Inspection!